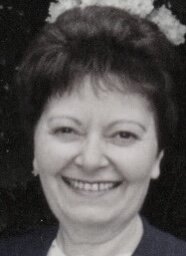 Alice Fretwell, died on November 18, 2021 after a brief hospitalization in Syracuse, New York. She was 92.  Alice was born in Brooklyn, New York, attended Our Lady of Guadalupe School and graduated from Bay Ridge High School. The Bensonhurst neighborhood she grew up in near 74th Street and 17th Avenue was populated by many descendants of Italian immigrants who came to the United States in the late 1800s—a neighborhood she often reminisced about. “We didn’t need any friends because there were so many from the family who lived just a block or two away.” Alice never tired of telling stories about shopping on 18th Avenue and her work at Alba’s Bakery during high school. “I wish we had places like that in Syracuse!”

Alice was an only child and raised in a small apartment by her mother. “We had a difficult life and never had any money of our own, but we made do with what we had. In fact, my classmates always wanted to trade sandwiches with me at lunchtime because my mom was such a good cook!”

Standard Brands hired Alice out of high school where she worked in a building managed by her favorite uncle, Nick Isoldi. It was said nothing got done in that building unless it went through Nick! She enjoyed spending lunchtimes with him in his office or when he would take her to the Brass Rail restaurant.

She spent many summers with her uncle Nick and his wife at farm retreats in Pennsylvania. There they would be joined by many other family members who were escaping the City heat.

Alice was pre-deceased by her husband, Sergeant First Class Dock Charles Fretwell, who she met on the Coney Island Boardwalk in 1946. They were married two years later and started a family in the New York City metropolitan area during alternating tours of duty at Ft. Jay on Governor’s Island and Ft. Hamilton in Queens. The family relocated to Ft. Greely, Alaska for four years before settling in Syracuse, New York.

Another move took the family to Bergenfield, New Jersey where Alice began a career with the Social Security Administration at the Hackensack District Office from which she retired in 1986. At that point she and her husband decided to return to Syracuse because of their fond memories of  Central New York.

Alice will be remembered as a devout Catholic, a loving mother and a loyal friend. A mass to celebrate her life will be held at Our Lady of Hope Catholic Church, 4845 South Salina Street, Syracuse, New York 13205 on Tuesday, November 23, 2021 at 10:00 AM.  Burial will follow at Onondaga Valley Cemetery.

To send flowers to the family or plant a tree in memory of Alice Fretwell, please visit Tribute Store
Print
Tuesday
23
November