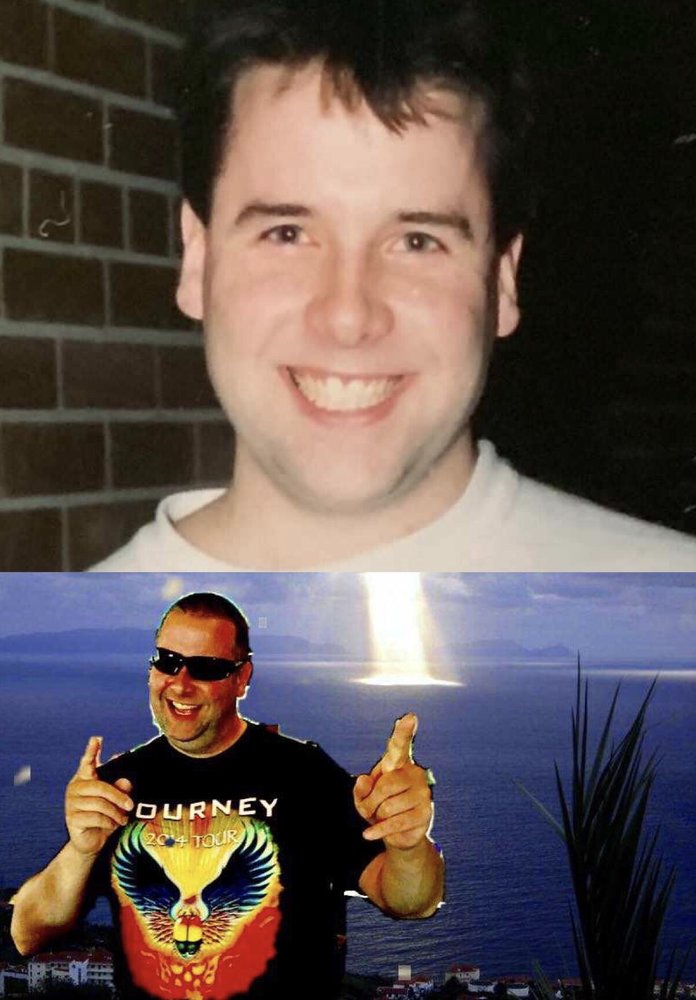 David G. Young, “Bueller”, 52, of Baldwinsville, NY, unexpectedly passed away Monday morning, April 15th, during a brief stay in Crouse Hospital in Syracuse, NY, keeping his birthday celebration going into the very early hours of the next day, no surprises there. David was born April 14, 1967 in Syracuse, NY, beloved son of Donald and Catherine Young. He loved to remind people that three historic events happened on April 14th– the Titanic sank, Lincoln was shot, and he was born. In keeping with his track record, the Cathedral at Notre Dame burned the day he died. David always had a way of making an impression. He attended Baldwinsville High School, Class of 1985, and one of the accomplishments he was most proud of was that he was the creator of the current Baldwinsville Bee symbol, so please say a prayer to David every time you see the bee. He took great pride in being called the “glue” of the Baldwinsville Class of 1985. Go Bees!  He graduated from Binghamton University in 1989, where he was a proud member of the SAE Fraternity and still used the secret rituals to get parking on the Syracuse Hill when he needed it. David was a gifted artist and salesman, and had careers with Multi-Image Design, DELL Computers, Vermont Teddy Bear and Nestle Foods. Most recently, he worked as a Disc Jockey for Jammin Beats, previously having worked for Whirlin Disc Sound. This was his true passion, entertaining with his music and of course, with his personality

David prized his family immensely. Out of all his many accomplishments, his wife and children were at the top of the list, and he ensured to document them and share his laughter anytime he could. With the introverted nature of his wife, his extroverted self provided her with many memories and experiences she might of never had if they didn’t sing karaoke on that Valentine’s Day night in 1992. He was the “cool dad,” to his children and their friends without trying. From surprising his sons’ sleepovers with 3 large pizzas, wings and soda to setting up disco balls and music for his daughter’s birthday dance parties, he always had ways of leaving trails of joy in the hearts of his children. During his time at Nestle, he became known to his children’s friends as “the Candy Man”,  always stopping into school to share the newest Nestle treats with them, much to the chagrin of many a teacher we are sure.  He made sure to call his parents every day to say “I Love You”, and shadowed over his little brother Don, even when he wasn’t so little anymore, most recently taking him to the Paul McCartney Concert and comedy club. His spontaneousness proves to be an honorable mention as well. These include many in-the-moment road trips to Florida, New York City, or just for a picnic at the lake just for the experience of doing it for, and with, the people he loved.

David was everyone’s friend, making sure to carry and cherish his friendships continuously throughout his life. His charm was difficult to ignore when you mixed his smile, sarcasm and self-confidence together. On every journey he took, you could be assured a loved one and his charisma came with him. He spread his love and energy to everywhere he went and everyone he met, keeping it bottled up was not an option. In this way, his imprints on this world can be felt far and wide, and when he couldn’t physically be with people, he used the internet to always stay connected. (His Facebook illustrates this notion from his photoshopped creations to his numerous photos of friends, family and fun times). His passing did not weaken the world, but strengthened it with love. His absent presence did not leave a void, but an abundance of energy. Let us not be sorry for his loss, but grateful for what the world has gained.

There will be Calling Hours from 4pm to 7pm and a mass immediately following at A. Dewitt Funeral Home 4612 South Salina St., Syracuse NY on Friday, April 19, 2019.

In lieu of flowers, please make donations to the Baldwinsville Scholarship Foundation in David G. Young’s name. He would really love that.

David truly embodied the phrase of “living life to the fullest,” and even when obstacles were presented on his road of life, he always found another route. This is only the surface of his legacy, and what’s underneath stretches too deep to be put into words. Everyone of us carries a little bit of the puzzle that is David, so lets all promise to keep putting those pieces together to spread his love to many more people for many more years to come.

To send flowers to the family or plant a tree in memory of David Young, please visit Tribute Store
Print
Friday
19
April